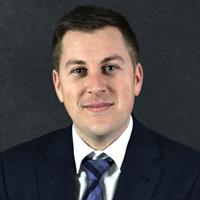 Michael Keeling is part of our Property and Probate, Wills, Tax and Trusts team in Llangollen and Chirk.

Michael Keeling joined GHP Legal in 2016 and is now the partner in the private client departments of our Chirk and Llangollen offices.   Michael specialises in residential and commercial sales and purchase of both registered and unregistered freehold and leasehold property.    Michael deals with large volumes of completions and cases per month together with Probate work including Wills and Lasting Powers of Attorney, Grants of probate, the administration of estates, deeds of variation and deputyship.

After gaining a degree from University of Huddersfield in 2008, Michael went on to complete his Legal Practice Certificate at Chester College of Law.   Since qualifying as a solicitor he has acted for a couple of famous singers, whose names must of course remain undisclosed.

With family who have been in Chirk for more than half a century and having worked for four years in the town’s Co-op as a student, Michael is well known among the local community. He currently lives in Gobowen and is a member of Henlle Park Golf Club. He lists watching and playing football among his other leisure activities, as well as indulging in good food and socialising with friends and family.