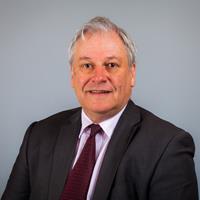 John Hulme is a partner in our Oswestry office where he heads up the Personal Injury department. A member of the SRA Personal Injury Accreditation Scheme, the Association of Personal Injury Lawyers and the Spinal Injuries Association, John has some 20 years experience in road traffic accident, employer's liability, fatal accident, clinical negligence and catastrophic injury claims His largest award is £5 million.

Originally from Ellesmere, John attended Malvern College and Bournemouth College of Commerce, graduating from London University in 1975, after which he went into teaching. Later deciding on a career change, he re-trained as a Solicitor and was admitted in 1985 after serving Articles with Rees Page in the West Midlands. He then worked for Charles W Bell in Welshpool, before joining Brown & Lloyd in Oswestry who invited him to become a Partner in 1991, nine years before the firm amalgamated with Gwilym Hughes & Partners (now GHP Legal).

A former left-handed batsman for England Schoolboys, John played for Gloucestershire II and Minor Counties Cricket for Shropshire. He also kept goal for ISFA and was on the books of AFC Bournemouth. Still maintaining a keen interest in all sports, John lives near Weston Rhyn with his wife and three young daughters. He enjoys rural life and includes cooking amongst his leisure pursuits