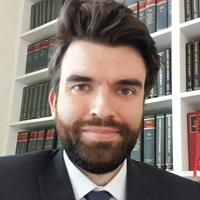 Our family law team, one of the largest in the region, consists of Solicitor-advocates, solicitors, a solicitor mediator and legal executives who between them deal with the full spectrum of family and associated matters. The team is headed by Nathan Wright, a partner of GHP Legal.

Originally from Dudley in the West Midlands, Sean studied law at the University of Aberystwyth and did his LPC at the College of Law, Chester. He subsequently moved to Cardiff where he lived for eight years and qualified as a solicitor with Martyn Prowel Solicitors. He qualified as a solicitor in 2019, and a year later was a nominee for Cardiff Law Society Junior Lawyer of the Year.

Since qualifying as a solicitor Sean has developed a close relationship with several domestic violence charities, including Cardiff RISE (Women’s Aid), BAWSO and Both Parents Matter, and has been commended on his ability to deal with clients who are the victims of domestic abuse.

When he is not working, and when COVID restrictions have not stopped play, Sean enjoys football and walking in the countryside around Chester and North Wales. He also lists pub quizzes among his other pastimes and recently won a prize as a contestant on the ‘Winning Combination’ TV show.