Staff from one of the largest law firms in Shropshire and North Wales will be teaming up outside office hours next month to raise funds for Cancer Research UK. The team will be taking part in the annual Race for Life event, alongside a colleague who was suddenly struck down by breast cancer two years ago.

Thirteen members of staff from across the four regional offices of GHP Legal are currently in training for the event which is due to take place at Alyn Waters Country Park in Llay, near Wrexham, on Sunday 4th June.

Delyth Underwood, assistant practice manager at the firm’s Wrexham head office, was diagnosed with breast cancer in June 2015 and began running as part of her recovery programme to rebuild her strength following months of gruelling treatment.

“Part of my aim”, said Delyth, “was to just get to 5k and run the Race for Life. The day of this year’s event at Llay will be exactly two years after my diagnosis and I have told myself I absolutely have to achieve it!

“I had so much support from different people and organisations during my treatment, and once I mentioned to colleagues that my goal was to participate in the Race for Life, several said they would like to join me.

“Cancer Research events are not competitive so whilst I will be running around the course, some of the GHP Legal group may just walk or jog. But what we will all be doing together is raising money for life-saving research in support of fellow staff members, family and friends who have undergone or are currently undergoing treatment for cancer.”

GHP Legal is well known for its charity fundraising team efforts. Irene Eke, a receptionist at the firm’s Oswestry office, has had colleagues dressing up for the ‘Wear it Pink’ Breast Cancer campaign every year since 1993, when she was diagnosed with the disease and was given only a 10 per cent chance of survival. 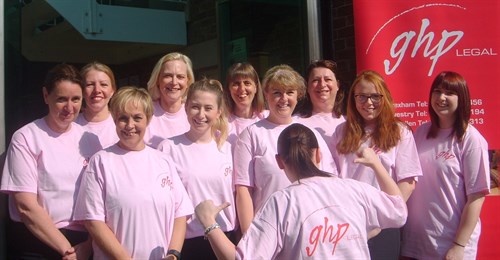