A Wrexham law firm has been ranked among the top 500 law firms in the UK.

GHP Legal, which has offices in Wrexham, Llangollen, Chirk and Oswestry is recommended as a Top-Tier Firm in The Legal 500 United Kingdom 2017 listing which was published this month.

The Legal 500 is the leading guide to law firms in the UK. The list of recommended firms is compiled by a team of experienced researchers who conduct rigorous interviews with candidates and obtain references from their clients. GHP Legal were noted for their ‘individualized service’.

Family Partner, Nathan Wright, was acknowledged for his ‘significant experience’ in dealing with complex business issues, high net worth property and high-value pensions, whilst Natalie Roberts, a partner in both the firm’s Family and Mental Health teams, was recommended for her handling of cases involving local authority concern for the welfare of a child.

The firm’s Crime department was, said the researchers, found by some to be ‘the standout criminal and regulatory defence firm in north east Wales and the Shropshire borders’, with an unrivalled experience in serious crime, including murder and complex cases of historic sexual abuse’.

Crime Partner, Stephen Edwards, who represented a defendant in one of the largest fraud cases in North Wales, was recommended along with associate Sallie Stokes, Crown Court advocate Henry Hills and Welsh speaking Partner, Euros Jones.

The Legal 500 researchers found that the firm’s Personal Injury department provides ‘individualized service’ on everything from small claims to complex multi-track cases including major psychiatric injury and brain injury cases. Key figures noted in the team were Partners, Robert Williams and John Hulme.

Robert Williams featured again in the recommendation of the firm’s Dispute resolution department which acts for owner-managed businesses and SMEs based in North Wales, Mid-Wales, Cheshire and Shropshire.

Recent highlights from the Dispute resolution team’s achievements include successfully challenging a public procurement decision by a local authority on behalf of an unsuccessful tender applicant and acting for a company director in challenging the validity of the appointment of the administrator by a finance company. Senior Solicitor, Robert Talog Davies, was praised for his ‘excellent depth of knowledge’ of Dispute resolution and litigation.

In the recommendations GHP Legal is also noted for its handling of Employment, Clinical negligence and Private client Personal tax, Trust and Probate matters. Other solicitors recommended within the firm are Claire Parfitt (PI) and GHP Legal Partner, Victoria Wilson (Private client), along with PI case load support Rob Jones. 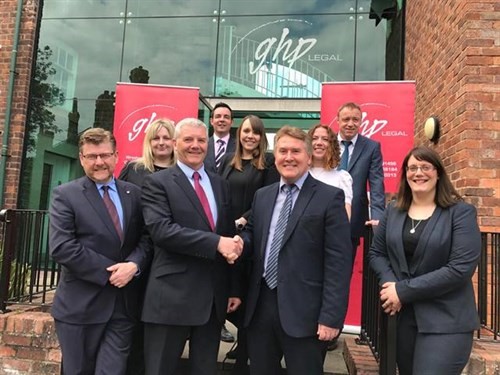